To illustrate, we ran a topic analysis Haskell/Scala app applied to all of English Wikipedia on 16 nodes (64 cores and 480GB RAM in total) simultaneously.

We’ll use topic modeling with Latent Dirichlet Allocation (LDA) from our last post as a running example. The full code for this distributed application is available here. It’s a short 35 line Haskell program, with a bona fide main entry point, leveraging the Spark API for transparently distributing data parallel operations over as many nodes in the cluster as are currently available. Much of the heavy lifting is performed by canned natural language processing code, also part of Spark, in their “machine learning” library.

In this post, like in the original Scala version, we’ll perform topic modeling on all of the English language Wikipedia. The nice thing about building a distributed app using the Spark API is that it can run anywhere. You can try performing topic modeling over such a large dataset on your laptop, like we did in the last post using a much smaller dataset, but you’ll likely run out of patience long before it finishes. So instead, let’s run this in the Cloud, where we can rent one-off clusters of any size on-demand for as long as we need one.

There are many Cloud services available to create such on-demand clusters easily, but the Databricks managed Spark service is particularly convenient to use. First, let’s build and package our Haskell app as a JAR archive that can be uploaded to Databricks:

As always, the --nix flag to all Stack commands means the build will use a locally provisioned, auto-downloaded JVM and Spark class files. This sequence of commands produces a file called sparkle-example-lda.jar, a self-contained archive containing our Haskell application as well as all of the Haskell dependencies and system shared libraries, plus some Java glue code to allow Haskell and the JVM to interoperate nicely. You can think of a .jar as a universal file format for running our application anywhere.

In the next section, we’ll run the app on a cluster using the Databricks paid service, but read on for how to do that on plain old Amazon EMR too.

Think of Databricks as an IDE for analytics. You get,

Databricks currently only supports Scala, Python and R in notebooks. But for full-fledged batch or streaming “jobs” (i.e. standalone apps), Haskell is supported too, via the sparkle bindings. Let’s walk through the process of running a distributed Haskell app in Databricks. 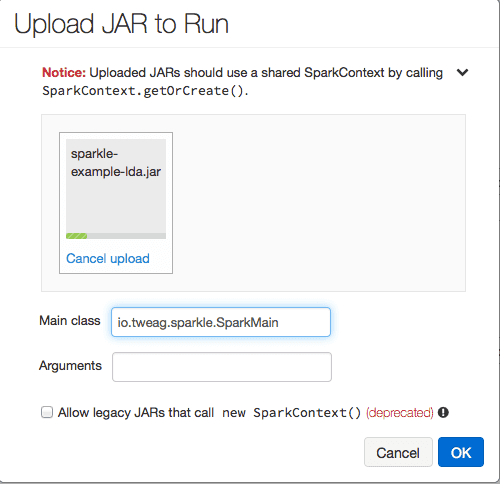 When you get to the upload step, just make sure to mention io.tweag.sparkle.SparkMain as the “main” class for your app (Amazon EMR recognizes the main class automatically but Databricks doesn’t yet).

When a job run starts, Databricks creates a new cluster specially for that job, which it tears down once the run is over. For the Wikipedia dataset, which we can represent (together with an integer index identifying each article) as a Haskell value using,

we created a large 16 node cluster to process all 4M+ pages that make up the English language Wikipedia in 27 minutes. And the results are in!

Alternatively, you can run the same .jar on Amazon Elastic MapReduce (EMR). Getting started with Amazon’s EMR just requires an AWS account. With those credentials in hand, the process is a matter of:

What we’ve shown in this post is that by packaging Haskell applications as standalone .jar files binding to industry standard JVM based API’s for distributed computing, we can now leverage a wealth of existing tools, environments and cloud services to transparently run Haskell on a very large scale. The key enabler here is that standalone .jar’s is the basic unit of distribution that enterprise and data analytics tools expect, so that’s the form factor we targeted for our Haskell app.

While the 4 million pages of Wikipedia stand at just 51 GB to process, 50 iterations of LDA topic modeling represents close to 30 hours of single core processing time, which we were able to bring down to just 27 minutes by provisioning a bunch of worker nodes at the click of a button. We didn’t have to build any of the infrastructure to support that feat ourselves: we got to reuse it for free.

In a future post, we’ll explore some of the technical details that made it possible to ship unmodified GHC-compiled Haskell as a standalone .jar that looks like any other Java program to the JVM. In the meantime, there’s plenty to do to fully realize the vision of seamless, statically typed, purely functional data analytics in the cloud. In particular, while in this post we focused on standalone Haskell apps, it would be great if support for Haskell extended to interactive notebooks with mixed Java/R/Haskell as well.

If you enjoyed this article, you might be interested in joining the Tweag team.
This article is licensed under a Creative Commons Attribution 4.0 International license.
← Haskell meets large scale distributed analyticsA new ecosystem for Haskell: the JVM →