I got the opportunity to work on Asterius, a new Haskell to WebAssembly compiler, during my internship at Tweag. My task was to get anything numerics-related stabilized in its compiled code. Generally, this meant experimenting with all the conversion routines between Float, Double, Rational, Int, and the ton of intrinsics that the Glasgow Haskell Compiler (GHC) provides for these values.

TLDR I helped integrate a part of GHC’s test suite with Asterius during my internship at Tweag. Now, it can pass almost all of the numerics test suite. It was a really fun experience—I got to read a bunch of GHC sources, fight with the garbage collector, and come out knowing a lot more than I did when I went in. We also ended up making some modest contributions upstream, to binaryen, tasty, and GHC.

I spent my first week getting familiar with the Asterius codebase so I could fix a bug with coercion from Int64/Int32 values to Int8 values. This task forced me to explore both the Asterius codebase and the corresponding GHC sources that were responsible for this bug. I continued making other small, localized fixes that enabled me to get to know the rest of the codebase.

The next major thing we worked on was integrating a part of the GHC test suite into Asterius—to enable us to sanity check our runtime against GHC’s battle-hardened test suite. The original GHC test suite is a large Python and Makefile based project which needs significant work to reuse for Asterius, so we chose an alternative approach: copy the single-module should-run tests into our source tree, write a custom tasty driver to run each test, compare against expected output, and write results into a CSV report. The CSV reports are available as CI artifacts, so by diffing against the reports of previous commits, regressions can be quickly observed.

The initial numbers were interesting: of all 706 tests integrated so far, if we were optimists, then 380 were passing, which was about half of all tests. And if we were pessimists…

We rolled up our sleeves and got to work: I decided that by the end of the three months, I wanted all tests in the numerics/ subfolder stabilized. These tests mostly deal with everything related to numbers including conversions between Float, Double, Rational, Int, Word, the various intrinsics in GHC.Prim for numbers, and tests for Integer support (implemented in Asterius with JavaScript BigInts).

The workflow to crush a bug was essentially:

It sounds quite repetitive, but it was anything but. I learned a lot of interesting details about GHC’s internals. For example, some of the ones I remember fondly are:

At the end of all of this, I had in total 59 PRs, 40 of which got merged into Asterius. The rest are either closed experimental branches, or open PRs waiting to be merged.

Our failure rate on GHC test suite has changed as:

Most of the remaining bugs we categorized appear to fall into the following classes:

Eventually, we found ourselves running into bugs in our implementation of the garbage collector in Asterius. These are usually incredibly painful to debug. Two major sources of the pain are:

Other than the seemingly endless loop of adding more logging logic and rerunning tests, we do have some debugging-related infrastructure. Since Asterius is a whole program compiler on the Cmm level, it’s possible to implement aggressive link-time rewriting passes to add tracing or asserting logic. For example, we implement the “memory trap” feature when the debugging mode is enabled: it replaces all wasm load/store instructions with calls to our read/write barrier functions implemented in JavaScript. These functions utilize the information in the block allocator and check whether an address points to a region which is already recycled by the copying GC. The memory trap is quite useful in making GC-related bugs crash as early as possible, and we indeed spotted use-after-free bugs with its help.

Another approach to check whether a runtime bug is GC-related: not running GC at all! We implemented a “YOLO mode” in the runtime which disables all evacuating/scavenging logic, and the only thing GC does is allocating new space for the nursery and resuming Haskell execution. By running the test suite with/without the YOLO flag and diffing the reports, we can quickly tell whether a test failure is likely related to GC.

I also eventually ended up writing helpers to structure the heap and figure out what arbitrary bit patterns I was looking at—bollu/biter was written during an afternoon of debugging some messed up floating-point representation bug caused by incorrect bit manipulation.

Similarly, another technique I began using was to create debug logs that would emit Python code. This Python code would then render the state of the heap at that given point in time: this is a much saner way to see what’s going on than view raw numbers or bit strings. For example: 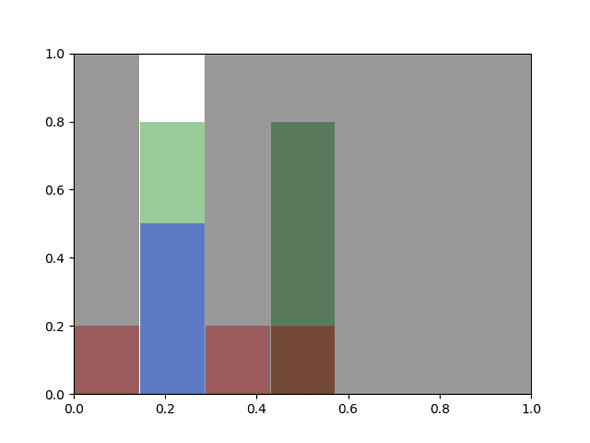 The fact that the gray region overlaps with the green region is a Bad Thing since we were freeing up some memory that is actually still kept alive by the higher-level heap allocator. Without visualization, this sort of thing is tough to recognize when you’re staring at nothing but pointers which look like:

So, the root cause of the bug above was some missing synchronization logic between our two levels of allocators. We have a low-level block allocator which allocates and frees large blocks of memory, growing the wasm linear memory when needed; above that comes the heap allocator which keeps a pool of blocks to serve as nurseries of Haskell heap objects. After a round of GC, we have a set of “live” blocks which make up the “to-space” of copying GC, and we free all memory outside the set. But we should have also been keeping alive the blocks in the pools owned by the heap allocator; otherwise a piece of already “freed” memory can be provided as nurseries without proper initialization. Look at the Python-generated graph, and the simple yet deadly problem is made obvious.

In general, debugging the GC took lots of patience and code. There are entire branches worth of history spent debugging, that did not get merged into master.

I loved working on Asterius at Tweag! I got to contribute stuff upstream, got my hands dirty with the garbage collector, the low-level cbits (C functions for various standard libraries), and while helping a real-world project! I hope to continue working on this and get the number of bugs down to zero.

Finally, Tweag’s Paris office is a fun place to work! I picked up (very little) French, a bunch about sampling and Markov chain Monte Carlo (MCMC) techniques, tidbits of category theory and type theory, some differential geometry, and enjoyed lunch conversations about topics ranging from physics to history. It was a delightful, rewarding experience—both personally and professionally!

If you enjoyed this article, you might be interested in joining the Tweag team.
This article is licensed under a Creative Commons Attribution 4.0 International license.
← Why Haskell is importantProbabilistic Programming with monad‑bayes, Part 1: First Steps →