Twice a year — in May and November, nixpkgs maintainers and contributors get together to fix as many build failures as possible for the new release. The event is, as per tradition, called Zero Hydra Failures, or ZHF for short.

This year, me and fellow hacker cab404 had organized a hackathon to help the cause and spread the Nix love around. The basic premise was, quoting cab404:

We wanted to fix as many builds as possible, right before the branchoff. Fixing the broken builds would allow NixOS 21.11 to have a more complete package set.

The main point of this post is to share the experience with people looking to organize similar events.

Due to the current lockdown in Moscow, we weren’t able to decide whether the hackathon would happen at all until about a week before the last possible date (the branchoff). This limited our ability to advertise the event in time for all potentially interested people to be able to join. Despite this, we tried our best to advertise the event using the following channels:

Obviously, we should have planned the event earlier. A week’s notice is way too little for many people, especially on a Friday. In hindsight, we could have anticipated that the branch-off was going to be late and ran the event on Saturday.

The event took place in undefspace, both physically and virtually (via workadventu.re).

We had provided lots of tea and snacks to physical participants, and a build machine to speed up builds.

First of all, the hackerspace was quite small. All of us managed to fit, just. If the event attracted any more people, it could become problematic. Plan your capacity!

Another problem was with the build server setup: while it was running, we didn’t have time to provide people with actual instructions on using it, so a lot of time was spent building packages on slow laptop CPUs instead of the significantly powerful build machine. The theme of lack of instructions limiting the impact of the event deserves a separate section.

As happens, most participants came in late. This meant that the spoken instructions I gave at the beginning weren’t heard by everyone, and it resulted in a slowdown in the hacking while people were trying to understand the process.

Another issue was that the written instructions on the website were aimed at mostly at experienced contributors, but most of participants didn’t have much nixpkgs experience — in fact, two of them made their first open-source contributions during the hackathon!

The takeaway here is that a lot of attention should be given to making instructions for the hacking you’re going to do — make sure to have something for newcomers as well as experienced hackers. 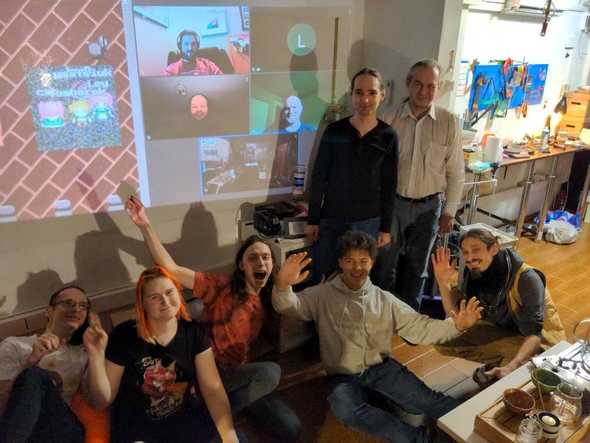 One of the best things about in-person hackathons is the ability to share knowledge and ideas — and plenty were shared!

And, most importantly, builds were fixed!

In total, 10 PRs were submitted during the hackathon: https://github.com/NixOS/nixpkgs/pulls?q=is%3Apr+zhfmsk

We fixed too many packages to count manually, and it’s not an easy thing to count programmatically. However, the openjfx11 fix on x86_64-linux has fixed a lot of Java packages, and other pull requests typically fixed one or two packages.

How are we going to improve the next one?

Pick the right time, in advance: we will try our best to arrange the hackathon on a weekend, with at least two weeks’ notice.

Provide better instructions for all skill levels: prominently displayed instructions on what exactly people need to do, together with links to learning materials for novices, should reduce the need for repeated explanations tête-à-tête, and speed the hacking significantly.

If you enjoyed this article, you might be interested in joining the Tweag team.
This article is licensed under a Creative Commons Attribution 4.0 International license.
← Type-checking plugins, Part II: GHC's constraint solverNix 2.4 and 2.5 →