We recently released a beta version of a web service called Chainsail, that helps with sampling multimodal probability distributions (you can check out our Chainsail announcement blog post for a quick introduction to this tool).

In parallel, this post aims to illustrate a use case of Chainsail with an example of probabilistic clustering with soft k-means. You will see that the Bayesian model discussed here exhibits a multimodal posterior distribution, and whereas single-chain MCMC algorithms notoriously struggle to correctly sample similar posteriors, we will show how Chainsail improves on that state of affairs.

Although clustering is particularly powerful on high dimensional datasets (as it allows to define clusters that could difficultly be inferred by a human), in this blog post, for the sake of simpler visualization, we simulate an abstract clustering problem in one dimension only. 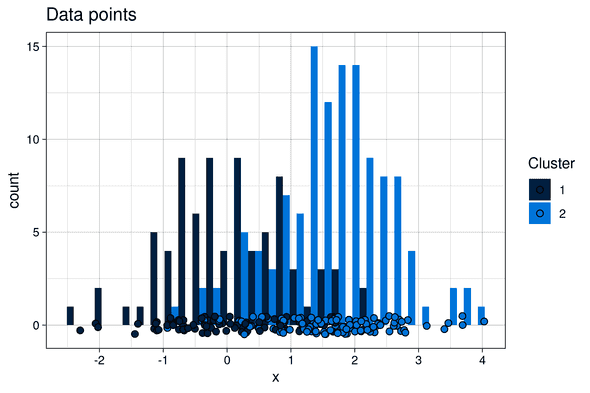 The model used to fit these data is a Gaussian mixture, inspired by the Stan example of soft k-means. We don’t discuss the model in detail here, but additional details can be found in the excellent Stan documentation.

The posterior distribution is visualized below: 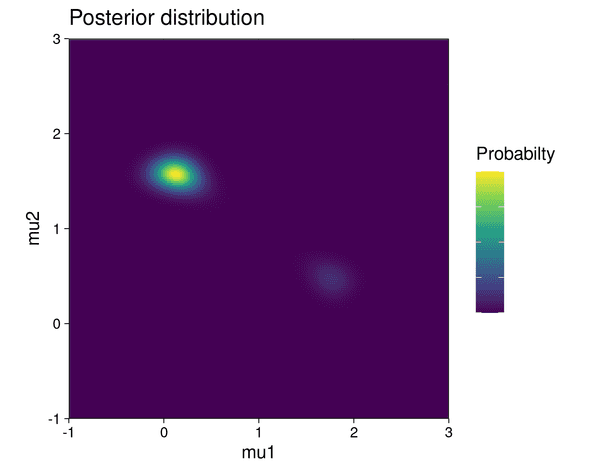 We created a simple Metropolis MCMC sampler for sampling this posterior distribution. Note that single chain sampling is also what most probabilistic programming libraries provide by default, although in a more advanced manner: they usually give the possibility to mix samples from multiple isolated chains and provide some sort of initial state estimation, which in practice makes these algorithms a bit more robust than our naive implementation here.

With an initial state for the MCMC chain set at (mean of 1st component, mean of 2nd component) = (1, 0), the chain gets stuck in the lower probability mode: 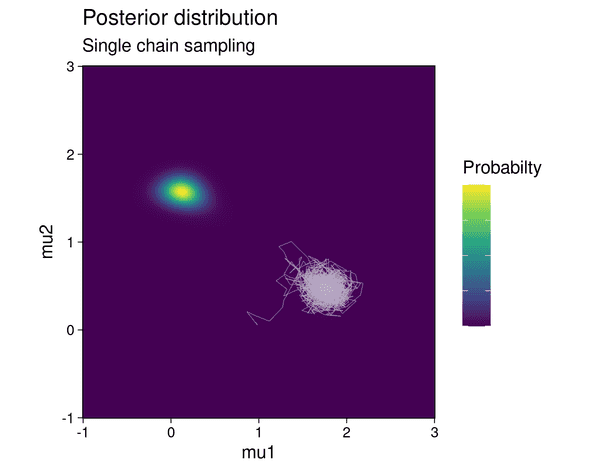 That means that the mixture component with the higher weight (component 2) incorrectly fits the cluster with the lower number of points and vice versa. As the following histogram shows, this results in the samples of the means being slightly offset from their expected positions (~(0, 1.5)) due to the mismatch between the number of points in the cluster and the weight of the Gaussian mixture component: 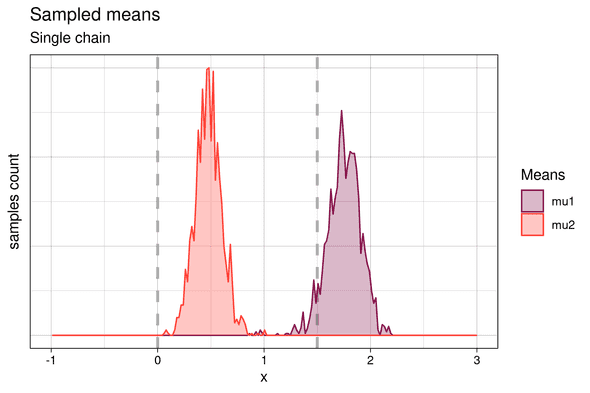 Soft k-means clustering treats the cluster assignments as probability distributions over the clusters. Each data point is associated with a probability distribution for each cluster, which is obtained from a transformation of the samples of the parameters (called the “soft Z” transformed samples). These soft Z distributions provide the probability of each point to belong to each cluster. In his book Pattern Recognition and Machine Learning, Christopher M. Bishop also calls this probability the responsibility that a component takes for explaining an observation X (chapter 9.2, page 432). We will adopt this name in the rest of this example. The histograms for the responsibilities of three individual data points are shown below (one point located on the left, one in the middle, and one on the right): 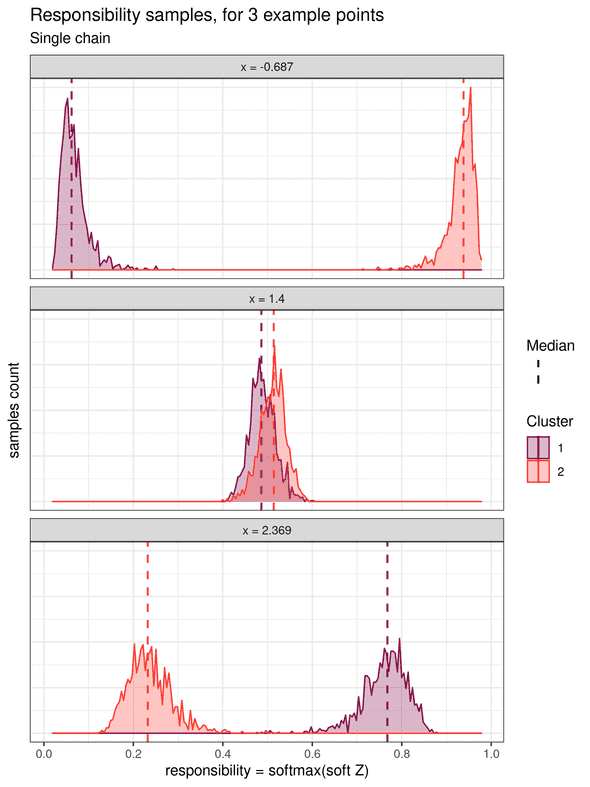 The leftward point at x = -0.687 shows a higher responsibility for cluster 2, and which is clearly distinct from the responsibility for cluster 1. Therefore, it can be unequivocally assigned to the cluster 2. Similarly, the rightward point at x = 2.369 can be unequivocally assigned to cluster 1. However, for the middle point at x = 1.4, the two responsibility distributions overlap strongly. This highlights the fact that this point is in an ambiguous area and cannot be assigned confidently to either cluster. Note that this uncertainty is not quantified in the traditional “hard” k-means algorithm.

If we summarize the responsibilities by, for example, their median value, soft k-means clustering can be converted to a “hard” k-means by assigning each point to its cluster of highest median probability. 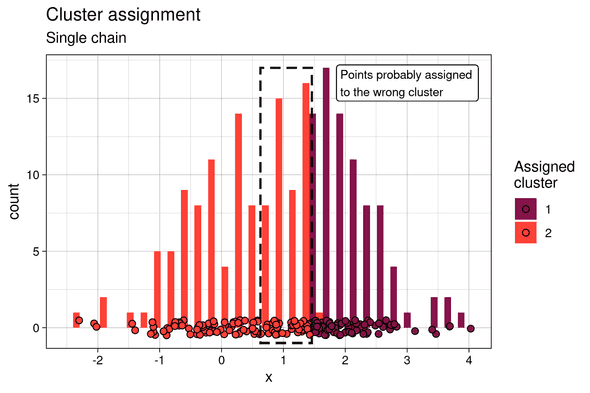 In this case, because only one mode of the posterior is sampled, and in particular the lower probability one, the cluster assignment is rather flawed. The points at the frontier of the two clusters (framed in dotted line) were assigned to the left cluster, which is the less probable one.

Chainsail implements Replica Exchange, a MCMC algorithm that has been specifically designed to sample multimodal posterior distributions by running several, communicating MCMC chains. Correctly tuned, it is far less prone to the over- / undersampling of modes. Let’s see whether the sampling and clustering obtained with Chainsail does a better job than a single chain!

After running the Chainsail web application, we find that Chainsail allows the main MCMC chain to sample both the low and the high probability mode instead of getting stuck in one of them: 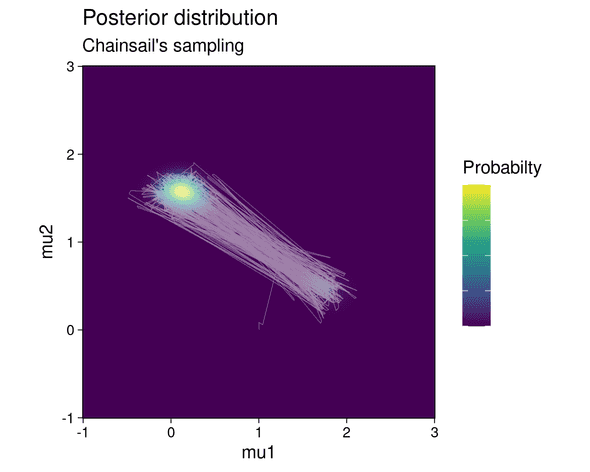 In fact, the main MCMC chain jumps frequently between both modes. The sampled means are shown below: 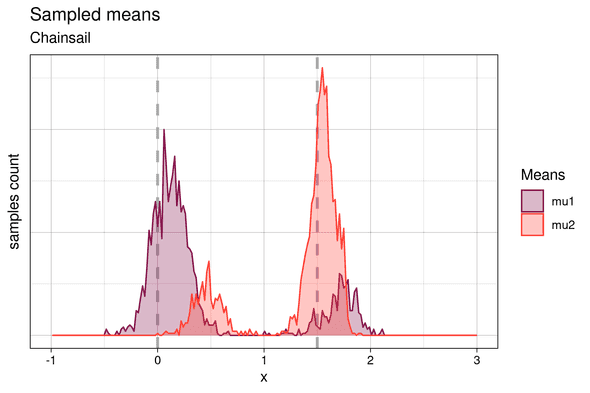 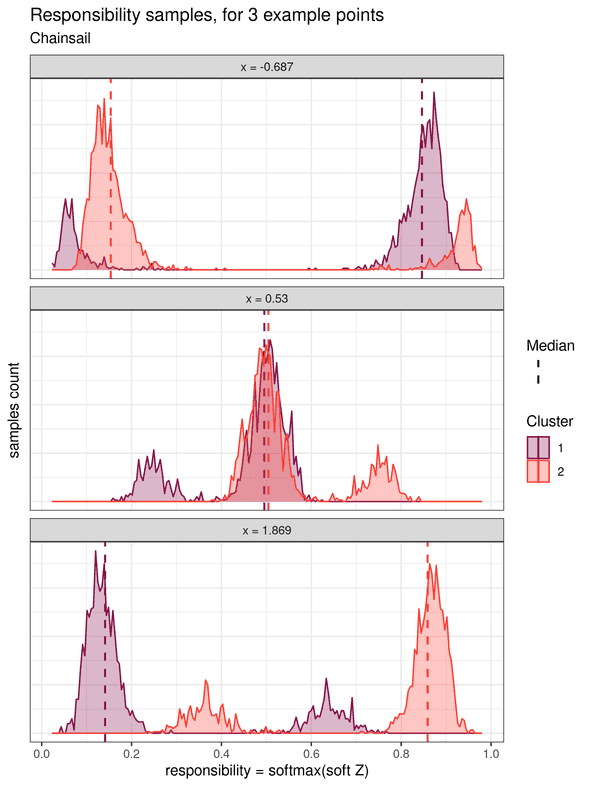 Therefore, with Chainsail, we capture the fact that there is a certain responsibility for both component 1 and 2 to have generated each data point. This is absent in the soft Z histograms for the single chain, and thus single-chain sampling made us miss out on important information. Finally, the clusters assignments are much closer to what would be expected with a hard k-means clustering: 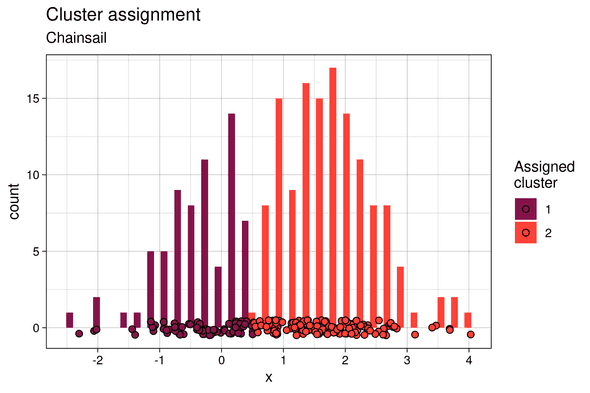 While this example showcased a rather trivial, one-dimensional problem, it highlighted the difficulty for single-chain MCMC algorithms to correctly sample multimodal posteriors, and the biased analysis results that this leads to. Keep in mind that while the posterior distribution is easy to visualize in this 1D case, most real life problems generate highly dimensional posteriors, in which case a bias in sampling is much less obvious to detect. Chainsail aims at providing a hosted and user-friendly solution to this problem.

The Chainsail-ready Gaussian mixture model, the single chain MCMC sampler, and all the code used to generate figures and data for this blog post are available here, as part of a bigger Git repository containing other examples of Chainsail use-cases and detailed documentation of Chainsail itself. We also wrote a series of blog posts about MCMC sampling algorithms, the fourth and last of which describes the core algorithm of Chainsail, Replica Exchange. Finally, to learn more about soft k-means and Gaussian mixtures, we heartily recommend chapter 9 of Christopher M. Bishop’s book Pattern Recognition and Machine Learning and the Stan documentation, which is full of other similar and also more advanced example models.

If you enjoyed this article, you might be interested in joining the Tweag team.
This article is licensed under a Creative Commons Attribution 4.0 International license.
← Announcing Chainsail: a web service for sampling multimodal probability distributionsIntroduction to NixOS specialisations →