Note: since Mar 19, 2020, we’ve changed the JavaScript import syntax: the i-th argument is now $i instead of ${i}. The code snippets in this post have been adjusted accordingly.

Asterius is an experimental GHC backend targeting WebAssembly, which makes it possible to run Haskell code in your browser or in a Node.js web service. Asterius has reached a new milestone: it can now compile the popular diagrams library for drawing with Haskell.

In recent months, Asterius has become a collaborative project with fixes and bug reports from the community, and major contributions from IOHK in addition to Tweag I/O.

In this post, we’ll demonstrate how to run diagrams examples in the browser. This is the culmination of a lot of groundwork, from better Cabal support to implementing green threads and many basic concurrency primitives. More on that later in the post.

Hilbert in your browser

Our example is about generating and displaying SVG directly in the browser using diagrams. We picked the Hilbert curve example from diagrams’s gallery. To use it with Asterius, we just have to adapt code provided in the gallery example as follows.

Let’s start with the imports:

We then define hilbert and example, exactly as in the original:

Next up is showSVG, an embedded fragment of JavaScript code that will be executed in the browser. It’s an immediately invoked function expression that appends a div element with the given contents to the page body.

Finally, main uses standard diagrams code to generate an SVG file as a String, then calls showSVG to display the element in the browser.

To compile and test this program, we turn it into a package with the help of a Cabal file. Here is the contents of the Hilbert.cabal file:

As usual, the quickest way to get started with Asterius is to use our Docker image:

To build the Hilbert project, proceed as follows:

ahc-cabal is a wrapper around the cabal executable, which supports almost all cabal commands, including the legacy v1 build commands and the nix-style new build commands. Here we use new-install to build the Hilbert “executable” along with all its dependencies, with each component installed into the nix-style cabal store. After the build finishes, a Hilbert symbolic link will appear in /mirror, which points to the Hilbert “executable” we’ve just built.

Finally, we need to extract the WebAssembly & JavaScript artifacts from the Hilbert file. In an earlier post, we used the ahc-link wrapper to that effect, but ahc-link generates wasm and mjs files from individual .hs files. Cabal, in contrast, outputs a single executable file. So we need to use another wrapper, ahc-dist, which generates wasm and mjs files from such an executable. Except for the input, ahc-link and ahc-dist flags are the same:

The --browser flag indicates that we are targeting the browser instead of Node.js. It generates the .wasm and .mjs files along with an .html file which loads and runs the program. Outside the Docker container, we can use a static web server to serve the artifacts and load Hilbert.html into a browser tab. We recommend warp from the wai-app-static package:

Your browser should display the following image: 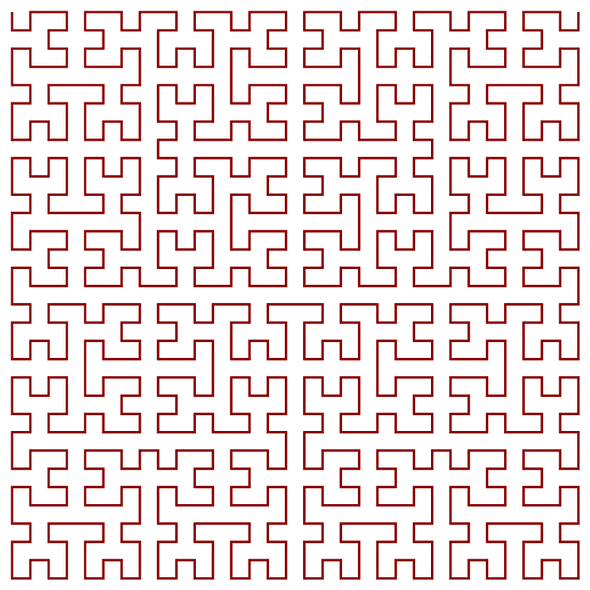 And here is a precompiled version you can try right now in your browser. (Due to an open issue, this example cannot currently be used in Safari.)

A taste of how we got here

To support the example above and many others, we improved Asterius along a number of dimensions over the last few months, each of which we aim to cover in its own blog post in the near future:

If you enjoyed this article, you might be interested in joining the Tweag team.
This article is licensed under a Creative Commons Attribution 4.0 International license.
← How to make your papers run: Executable formal semantics for your languageIntroduction to Markov chain Monte Carlo (MCMC) Sampling, Part 2: Gibbs Sampling →