This is part 2 of a series of blog posts about MCMC techniques:

Why would splitting up sampling in this way be preferable? Well, it might turn the problem of sampling from one untractable joint distribution into sampling from several well-known, tractable distributions. If the latter (now conditional) distributions are still not tractable, at least you now can use different and well-suited samplers for each of them instead of sampling all variables with a one-size-fits-all sampler. Take, for example, a bivariate normal distribution with density p(x,y) that has very different variances for each variable:

The @ is a recent-ish addition to Python and denotes the matrix multiplication operator. Let’s plot this density:

Now you can try to sample from this using the previously discussed Metropolis-Hastings algorithm with a uniform proposal distribution. Remember that in Metropolis-Hastings, a Markov chain is built by jumping a certain distance (“step size”) away from the current state, and accepting or rejecting the new state according to an acceptance probability. A small step size will explore the possible values for x very slowly, while a large step size will have very poor acceptance rates for y. The Gibbs sampler allows us to use separate Metropolis-Hastings samplers for x and y - each with an appropriate step size. Note that we could also choose a bivariate proposal distribution in the Metropolis-Hastings algorithm such that its variance in x-direction is larger than its variance in the y-direction, but let’s stick to this example for didactic purposes.

So how does Gibbs sampling work? The basic idea is that given the joint distribution p(x,y) and a state (xi​,yi​) from that distribution, you obtain a new state as follows: first, you sample a new value for one variable, say, xi+1​, from its distribution conditioned on yi​, that is, from p(x∣yi​). Then, you sample a new state for the second variable, yi+1​, from its distribution conditioned on the previously drawn state for x, that is, from p(y∣x_i+1). This two-step procedure can be summarized as follows:

This is then iterated to build up the Markov chain. For more than two variables, the procedure is analogous: you pick a fixed ordering and draw one variable after the other, each conditioned on, in general, a mix of old and new values for all other variables.1 Fixing an ordering, like this, is called a systematic scan, an alternative is the random scan where we’d randomly pick a new ordering at each iteration.

Implementing this Gibbs sampler for the above example is extremely simple, because the two variables are independent (p(x∣y)=p(x) and p(y∣x)=p(y)). We sample each of them with a Metropolis-Hastings sampler, implemented in the first blog post as the sample_MH function. As a reminder, that function takes as arguments, in that order,

We then use sample_MH in the following, short function which implements the systematic scan Gibbs sampler:

The sample_gibbs function will yield one single sample from bivariate_normal. As we did in the previous blog post for the Metropolis-Hastings algorithm, we now write a function that repeatedly runs sample_gibbs to build up a Markov chain and call it:

Tada! We used two very different step sizes and achieved very similar acceptance rates with both.
We now plot a 2D histogram of the samples (with the estimated probability density color-coded) and the marginal distributions:

Looking at the path the Markov chain takes, we see several horizontal and vertical lines. These are Gibbs sampling steps in which only one of the Metropolis-Hastings moves was accepted.

The previous example was rather trivial in the sense that both variables were independent. Let’s discuss a more interesting example, which features both a discrete and a continuous variable. We consider a mixture of two normal densities p_N(x;μ,σ) with relative weights w1​ and w2​. The PDF we want to sample from is then

How does it look like? Well, it’s a superposition of two normal distributions: 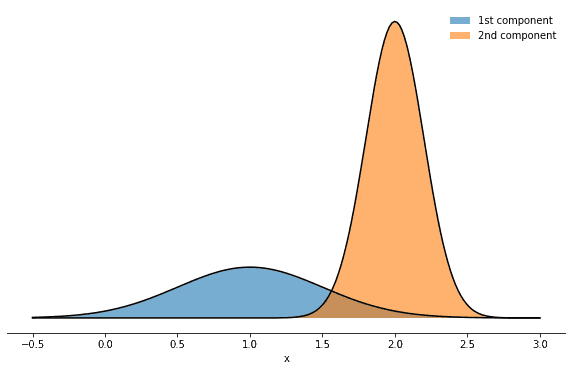 Inspired by this figure, we can also make the mixture nature of that density more explicit by introducing an additional integer variable k∈1,2 which enumerates the mixture components. This will allow us to highlight several features and properties of the Gibbs sampler and to introduce an important term in probability theory along the way. Having introduced a second variable means that we can consider several probability distributions:

Let’s first implement a Gaussian mixture with these conditional distributions:

The interesting point here (and, in fact, the reason I chose this example) is that p(x∣k) is a probability density for a continuous variable x, while p(k∣x) is a probability distribution for a discrete variable. This means we will have to choose two very different sampling methods. While we could just use a built-in numpy function to draw from the normal distributions p(x∣k), we will use Metropolis-Hastings. The freedom to do this really demonstrates the flexibility we have in choosing samplers for the conditional distributions.

So we need to reimplement sample_gibbs and build_gibbs_chain, whose arguments are very similar to the previous implementation, but with a slight difference: the states now consist of a float for the continuous variable and an integer for the mixture component, and instead of a list of stepsizes we just need one single stepsize, as we have only one variable to be sampled with Metropolis-Hastings.

Plotting a histogram of our samples shows that the Gibbs sampler correctly reproduces the desired Gaussian mixture: 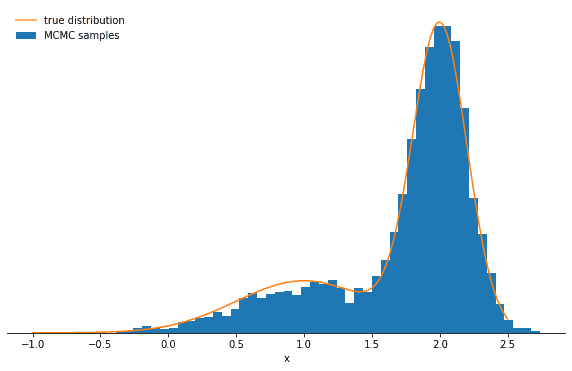 You might wonder why we’re also printing the average probability for the chain to sample from the component it is currently not in. If this probability is very low, the Markov chain will get stuck for some time in the current mode and thus will have difficulties exploring the distribution rapidly. The quantity of interest here is p(k∣x): it is the probability of a certain component k given a certain value x and can be very low if the components are more separated and x is more likely to be in the component which is not k. Let’s explore this behavior by increasing the separation between the means of the mixture components:

Let’s plot the samples and the true distribution and see how the Gibbs sampler performs in this case: 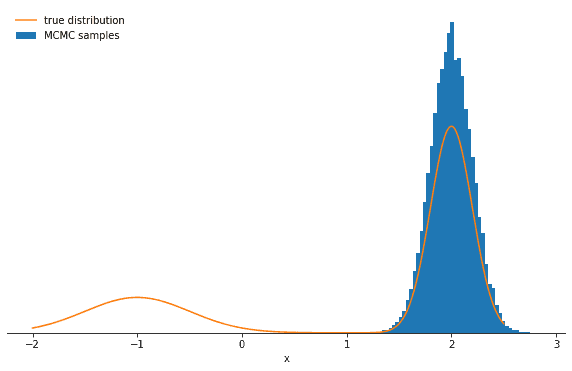 You should see the probability decrease significantly and perhaps one of the modes being strongly over- and the other undersampled. The lesson here is that the Gibbs sampler might produce highly correlated samples. Again—in the limit of many, many samples—the Gibbs sampler will reproduce the correct distribution, but you might have to wait a long time.

By now, I hope you have a basic understanding of why Gibbs sampling is an important MCMC technique, how it works, and why it can produce highly correlated samples. I encourage you again to download the full notebook and play around with the code: you could try using the normal function from the numpy.random module instead of Metropolis-Hastings in both examples or implement a random scan, in which the order in which you sample from the conditional distributions is chosen randomly.

Or you could read about and implement the collapsed Gibbs sampler, which allows you to perfectly sample the Gaussian mixture example by sampling from p(k) instead of p(k∣x). Or you can just wait a little more for the next post in the series, which will be about Hybrid Monte Carlo (HMC), a fancy Metropolis-Hastings variant which takes into account the derivative of the log-probability of interest to propose better, less correlated, states!

If you enjoyed this article, you might be interested in joining the Tweag team.
This article is licensed under a Creative Commons Attribution 4.0 International license.
← Haskell art in your browser with AsteriusA Tale of Two Functors or: How I learned to Stop Worrying and Love Data and Control →